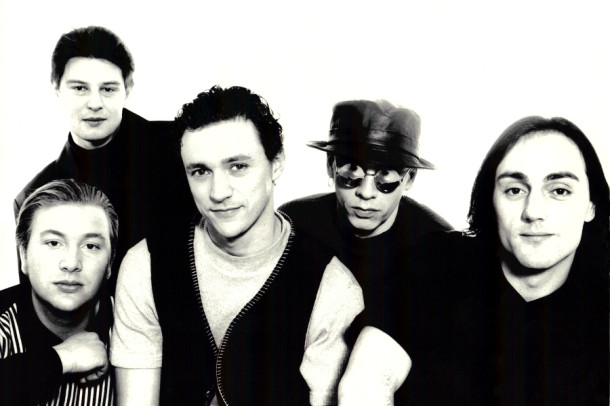 Russel Paye was recruited by the band for The Commitments tour. He could play the guitar, of that there was no doubt. He could hold a harmony too. He was a bright bloke – a Chemistry teacher from Lenham. Though at 28, he was still living with his mother, perhaps telling a story. And he did have some irritating character traits, which came to the fore when The Commitments tour sigued into the 40-date David Essex tour. He had an eye for the ladies, sometimes at the expense of everything else and used to say “She loves me” every time a female looked in his direction. Occasionally they did, but more often they didn’t. And on the last date of the tour, his barren streak was so well known that the support crew stuck a sign on his vocal monitor, which implored “I Need Somebody To Love!”, visible to the whole audience, but not to Russel.

Initially Darren and Russel were very tight but cracks began to show halfway through the tour, much to the amusement of the other members of the band. As the support act, you do not expect the kind of VIP treatment afforded to such legends as David Essex but there are perks. At every gig, we had our own changing room, a few drinks and one tray of sandwiches, cellophane-wrapped for freshness. The curious thing about this tray was that it always had exactly one samosa and one onion bhajee on the top, as if to give us a taunting taste of the luxury lavished on the main act. And that samosa and bhajee always went the same way – down Russel’s throat. He seemed to have no qualms about eating them every time. Now obviously greater crimes have been committed in the history of human kind, but it was the kind of behaviour likely to irk on a long tour. Enter Darren. For once, he arrived before Russel to find the cellophane still intact. As quick as a flash, as if he’d been dreaming of the moment, he whipped out the bhajee, dropped his trousers and rubbed the bhajee repeatedly on his bellend. Then, for the main course, he poked the samosa up his chocolate starfish until he was completely satisfied. He replaced the bhajee and samosa on top of the pile of sandwiches and carefully straightened the cellophane. Sure enough, Russel soon arrived, immediately whipped off the cellophane, grabbed bhajee in one hand and samosa in the other. The bhajee went straight in his mouth, quickly followed by the samosa. Only Jon was left with him in the room as the others had collapsed into fits of giggles and fled the scene. Russel finally seemed to notice the strange behaviour and asked Jon what was up. Somehow he managed to keep a straight face. “That taste alright did it Russ?” “Yeah, er, why?” “Well, you just might want to ask Darren where he just put them!”

8 years ago in Characters, Tours
Comments