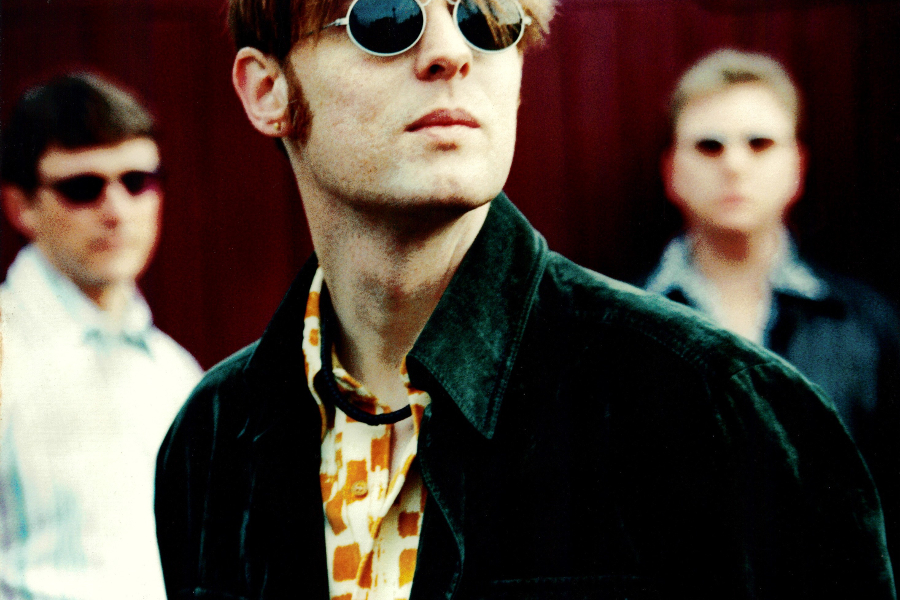 It all began in 1989. Kevin Taylor and Mark Sellar were thrashing through a couple of old Beatles tunes in an old nursery building in Lordswood. A guy heard the racket and realised that there was no bass. His name was Neil Blinkho. He walked over to his house, came back with his instrument and Ouch! was born.
A few months later, the trio was gigging, mixing Taylor-penned originals with a variety of classic tunes.

The next step was a five-track demo of original songs, recorded at Roseyard Studios in Maidstone. The owner of the studio was sufficiently impressed to offer to manage the band and release More Than A Friend as their first single. But then came a phonecall from London. It was a Mr Tony Berry from Cavell Records. Mark had seen an ad in a magazine, placed by the new record company, who wanted to hear demos. He’d sent the tape to them. Tony said they loved the songs and wanted to hear the band live. When they did, Ouch! were signed on the spot. The trio each received a cheque for £200, which seemed like an absolute fortune.

The decision was made to add a keyboard player and the job went to Darren Green, a local busker, who the band spotted playing on Chatham High Street. Ouch! were now a four piece and at the beginning of 1991 were recording debut single I Need You More at Abbey Road Studios.

The record and accompanying video went down a storm. Capital Radio’s switchboard was overloaded by people asking where they could buy the single. Ouch! appeared on Pebble Mill, Get Sharp, Motormouth, The Kelly Show, The Chart Show and Gimme 5 but incredibly, with Cavell already running out of money, the record did not make it into shops in time to meet the demand.

Luckily, the owners of Eden Studios in West London were so enamoured by Ouch!’s demos that they offered to record their debut album free of charge. Though the band were delighted with the result, during recording it became clear that Neil Blinkho’s bass playing was a liability and Kev reluctantly had to say goodbye to his sidekick and funny man. With the album completed and a tour supporting “Stars From The Commitments” on the horizon, it was time to find a new bass player.

In fact, the band recruited both Jon Mellor on bass and Russel Paye on lead guitar. Between March and May 1993, the band played 52 dates, in support of first The Commitments and then 70s lovegod David Essex. By the time Ouch! moved onto the Radio One and Atlantic Radio roadshows in the summer, Russel had been replaced by Jim Knowler. But despite the excellent exposure Ouch! were enjoying, there was no money to release another single. In a desperate bid to steer the ship, Ouch! signed to Luton-based management company Freeway Music. Freeway did manage to engineer the release of Can’t Stop Looking At You as the next single but resources were stretched and marketing was severely limited.

But then the band received good news from afar. Cavell had managed to sign licenses of Life Goes On with RPM in South Africa, Polydor in Germany and Sony in Japan. And it was in Japan that Ouch! achieved their greatest success. During 1994, the Japanese release of Life Goes On spawned two No.1 singles, Can’t Stop Looking At You and You Should Know By Now. The band’s first far eastern tour followed, seducing radio, TV and live audiences with several stunning ‘unplugged’ sessions built around their tight vocal harmony arrangements and the eerily Lennonesque quality of Kev’s voice.

The boys returned home buoyed by their fortnight of popstardom but sadly Cavell were no Sony. There was not enough money to promote the band but nor were Cavell prepared to let Ouch! ply their trade elsewhere. An offer from PWL was turned down as Cavell desperately tried to hold on to their prized asset. The management company, Freeway, were also ineffective and Ouch!’s manager Ross Hemsworth, was sacked by the company, which left Ken Wiltshire in charge. Cavell finally admitted defeat but their last act before filing for bankruptcy was to pocket Ouch!’s £10k Japanese publishing advance for the second album. Jim Knowler had seen enough and went home to Whitstable!

In 1996, the band received a lifeline from an eccentric German millionaire, Juergen Hueholdt, who proposed a £100k budget for the recording of the next album. Instead of biting his hand off, Ken got drunk and tried to knock his block off! Two of the band managed to restrain the brandy-fuelled manager but the damage was done and the offer was retracted. Instead Jon proposed to the management company that he and they should finance an album 50/50. Freeway agreed. But the budget was tight and there was no Abbey Road this time. Darren too left the band because of their lack of earning potential and poor old Mark sat in the corner as the band took the cost-cutting decision to use pre-programmed drums. Kev, Jon and Mark finished the task of selecting from over 40 songs that had been written since Life Goes On and recorded the album with the help of keyboard player Vince Hurley, Mark Kelser(backing vocals and engineer!) and Martin Rice(lead guitar). With no money to finance an UK release, the band once again turned their attention to Japan. There the release of the second album, Knock! Knock! brought the band a third hit single, It Could Have Been Me, inspired by the plight of forgotten Beatle, Pete Best. Later that year the band toured Japan for the second time, accompanied by Dave Robson on lead guitar and Mike Stodart on keyboards.

Kev returned home to find his mother gravely ill and was devastated when she died soon after, only a few weeks before the birth of his first child. It was many months before he found the appetite to return to music again. As fate would have it, Kev and Jon were invited by Mark Kelser to record in Germany for the lost German millionaire, Juergen Hueholdt. This began a collaboration that lasts to this day, with Kev and Jon having recorded well over 100 songs for Juergen at his studio near Bochum. In 1998, two events occurred that led the way to the recording of Ouch!’s third and final album. Firstly, Kev and Darren began working together and secondly, Jon was commissioned to write the score to a full-length feature film for Universal. Kev, Jon and Darren reunited to write new material and Jon used the money from his commission to put Ouch! back in the studio. In 1999, Jon recorded Ouch!’s third album Medway Dog using his own company Funky Dad Ltd. Kev, Jon and Darren were joined by Groove Armada’s Clive Jenner on drums and Eddie “Two Brains” Stewart on lead guitar. The result was their finest album, with energetic performances and great production by Mark Frith marrying perfectly with fine songwriting and matured arrangements. But the venture was a big risk for Jon. He had to borrow heavily to finance the album and when the album was turned down by Sony and Fuji Pacific in Japan, it was clear the gamble had not paid off. Jon did manage to coerce Ken Wiltsher into funding the UK single release of Seen the Light/I Never Kissed Your Picture but when that too failed to chart, the end was nigh.

When it came, it was in the most dramatic of circumstances. On the day of the single launch at The Garage in Highbury, Kev went awol, and when he finally arrived, well after the band had been scheduled to appear on stage, he said he was unable to sing. Darren did his best to deputise but it was all too much for Jon, who had a very public meltdown over the mic. With the audience agog at the spectacle and the fat lady warming up, Ouch! launched into the last song they ever played as a full ensemble. Inexplicably, Kev sang Draggin’ Me Down as if nothing was wrong, before walking off stage with his guitar, out of the door and back down the M2 to where it all began!

Kevin Taylor and Jon Mellor made the peace and collaborated for many years, including a one-off TV session as Ouch! in 2001. They played in a trio with Clive Jenner until 2002, when Clive left to join Groove Armada. After that, they played hundreds of gigs as a duo, including a Friday night residency at Ye Arrow on Rochester High Street! Kev and Jon also collaborated on the Juergen Hueholdt's Juniper Project, arranging and recording over 100 songs in an eleven year period. In 2009, Jon emigrated to Melbourne, Australia, where he has built a reputation on a thriving ska scene. Kev still plays with the Juniper Project and if you want to say hello, you can still find at Ye Arrow on a Friday night.

Darren Green now plys his trade as a Jerry Lee Lewis tribute. He started in the show Rockin’ On Heaven’s Door in 2004 and since 2010 has been the star of the hit show Rock’n’roll Paradise, touring all over Europe.

Clive Jenner plays with The Proclaimmers and is one of the UK’s top session drummers as well as running Ealing Drum Studios.

Mark Sellar has hung up his kit and now works as a window fitter. He still lives in Chatham.

Jim Knowler has for many years played with the Hullabaloo Trio.

Ross "The Hammer" Hemsworth is a “TV & radio presenter, songwriter and law student”, who claims to talks to ghosts. He once made an abortive bid to buy Gillingham FC!

Ken Wiltsher died last year after suffering a heart attack. He had enjoyed a colourful life and become a successful businessman. And he always did play hard! RIP Ken.

Tell us where Neil Blinkho is!

Ours is not an unique story. There must be thousands of other bands who can tell equally tragic stories of how their chance of a successful and rewarding musical career was squandered.

But 13 years after we last played a gig, people still contact me to tell me their Ouch! story. Somebody emailed me earlier this year to tell me that he and his girlfriend used to love the band in the 90s. They split up, both married, both had kids, met again years later, by which time both had divorced. They were soon to remarry and he wanted to know whether Ouch! were still together and could play at their wedding! I had nothing to tell him, nothing to show him, and it made me sad.

But now I have. And our hope is that this website will foster a little Ouch! community. Maybe we will find a few old demos. Or better still we could rework old tunes. Or even better write new ones. We are on different sides of the world but technology means that none of these hopes need be just dreams.

And ultimately, if we get to tour again, then I will be a very happy man.