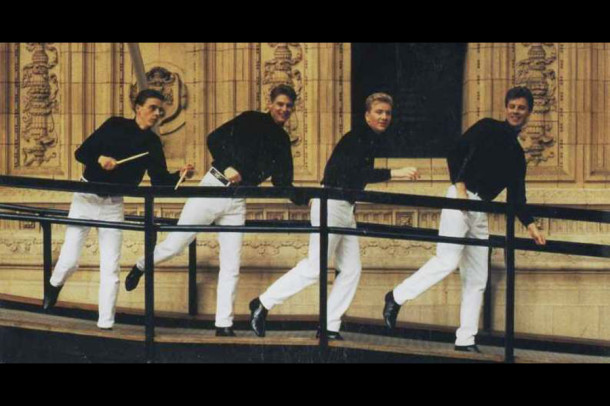 Fans of Ouch! from the very early days will remember the original bass player, Neil Blinkho. Neil was Kev’s sidekick and guaranteed to make him laugh on cue. Tales of Neil’s antics are plentiful but surely his finest hour was the band’s very first video shoot for I Need You More. Cavell had decided on Brighton beach as the location for much of the filming and one of the scenes involved a band tea party. As Kev and Darren brought their cups down, Neil and Mark had to pick theirs up. They then took a sip, put them down as Kev and Darren picked theirs up, took a sip, put cups down as Neil and Mark picked up. And so on. You get the picture. Simple enough. Yet not, sadly, for Neil. The coordination required for this precise manoeuvre was beyond him, causing the band to be stricken with uncontrollable laughter and ultimately for the scene to be shelved. But better was to come.

With light fading, the film crew were anxious to get the last shot, of the boys running down a hill and off into the distance. Neil was desperate to go to the toilet but was refused because of the time pressures. To make matters worse, the run had to be filmed and refilmed with Neil struggling to hold his load. On the last run, Neil continued on out of shot and into the distance, having comprehensively soiled his hired white trousers. “I told you I needed a sh*t!”

9 years ago in Characters
Comments