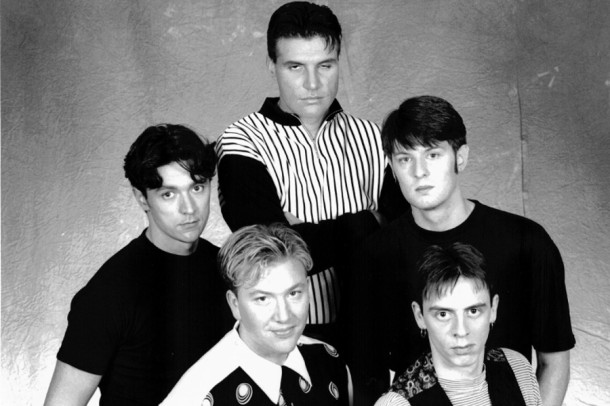 Tales Of Mismanagement No.1

Jim Knowler replaced Russel Paye on lead guitar shortly before what turned out to be the highest point of Ouch!’s career – their first tour of Japan. With Cavell struggling financially, they managed to sign a license with Sony Japan to release the first album Life Goes On. But shortly after the band’s return from the tour, as the euphoria began to fade, it became apparent that Cavell could not further Ouch!’s progress. An offer from PWL was, to the band’s dismay, turned down. But eventually Jon got Cavell to agree that the band could pursue other avenues.

Now Jim was a good looking boy. In fact he was so good looking that Cavell Records’ music man, Tony Berry, had a bit of a mancrush on him. He thought he looked like Van Damme and said more than once he should consider a career in the movies. These things are crucial in the pop world. At that time, the promo photos were considered, in our genre, to be as important as the demos. Sad but true. Cavell had agreed to print up 20 promo shots so that the band could make up a package to take to potential suitors. When Jon arrived to pick them up, he was invited into Tony’s office, where Tony sat, with his hand partially covering a brown paper bag. “Before I show you these photos, Jon, I should explain”, he whined, “that there’s a bit of a problem with Jim’s eye.” A bit of a problem? Less Jean Claude Van Damme. More Herman Munster. Cheers Tony!

Well, here’s the photo – you judge for yourself!

8 years ago in Characters, Management
Comments