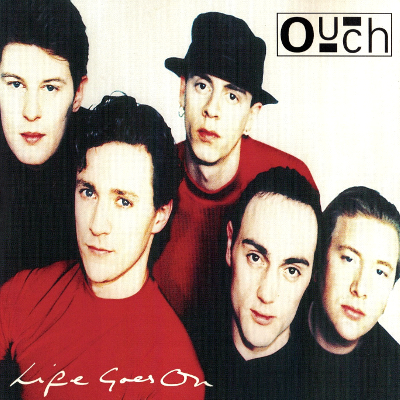 The band’s first album Life Goes On was recorded in 1992 for independent label Cavell Records. Two tracks, I Need You More and World Of Fantasy, were, to the band’s great excitement, put to tape at Abbey Road.

Although the band were truly honoured to be recording in the spiritual home of their biggest heroes, they were not the greatest admirers of tradition during their time as temporary tenants. At this time the band were still in their original line up of Kev(guitar/vocals), Darren(keys/vocals), Neil Blinkho(bass) and Mark Sellar(drums) and hence had not yet succumbed to Jon’s calming influence. Their antics ensured that Ouch! are unlikely to be welcomed back there with open arms, even 21 years on!

The album was not released in the UK until 1993, by which time Cavell were virtually bankrupt. In fact, they took so long to produce the album artwork that new bass player Jon Mellor and lead guitarist Russel Paye made it onto the front cover without playing a note! But in Japan the album was backed by Sony and there its release spawned two number one singles and a successful tour in 1994.

Highlights include You Don’t Fool Me Twice, Can’t Stop Looking At You, More Than A Friend and Life Will Go On.