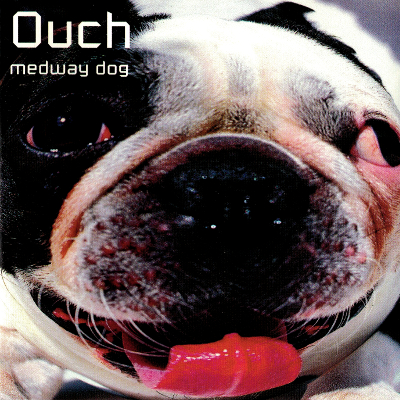 Medway Dog is the band’s last and best album. The songs were written and arranged by reunited trio Kev, Jon and Medway legend Darren Green in 1998 and 1999 and feature drummer Clive Jenner, who has also played with Lenny Kravitz, Groove Armada, The Proclaimmers and The Freestylers, and lead guitarist Eddie ‘Two Brains’ Stewart. The album, released through the band’s own label, Funky Dad, and funded by the same generous and thereafter broke bass player, is brimful of energy and does not contain a bad song.

The first single Seen The Light/I Never Kissed Your Picture was finally released in the UK in April 2000, but at the single launch gig, disaster struck. Since that night, the band have not played together as a full ensemble, which makes this album some kind of collector’s item!

Other stand out tracks include the anthemic Never On A Sunday, the haunting Beatles-inspired Multicoloured Mirrored Eyes and the last song the band ever played live, Draggin’ Me Down. This album is Ouch! at its very best.